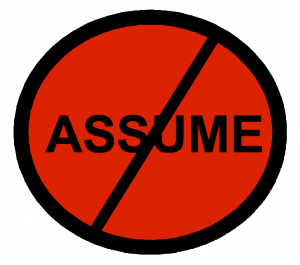 In a sort of mental shorthand, many of us make certain assumptions regarding our financial lives. This may make financial planning –or the lack of it – a little easier, but unfortunately, these assumptions often are based on misinformation or just plain wishful thinking.  In turn, such assumptions can prove extremely costly.  Here are a few to reconsider.

Assume stocks will always return 20 percent… or 30 percent… or more.  Yes, the recent drops in the markets may have thrown a little cold water on the party, but many investors remain convinced that U.S. stocks will resume their well-above-average returns far into the future.  They are unhappy if their portfolios don’t return at least 15 percent, perhaps 50 percent a year.  Financial planners recommend injecting realistic assumptions into your portfolio planning.  From 1926 to 2014 large-cap stocks, represented by the Dow and the S&P 500 ( stock market indices that measure performance), 2014 averaged 70 % a year, according to Investopedia. Not shabby, but certainly suggestive that high double-digit returns cannot be sustained.  Instead of assuming high returns every year, diversity and target a realistic return that will work towards achieving your financial goals.

Assume you need to win the lottery to be wealthy.  Three in ten Americans think their best chance to end up with at least half a million dollars in their lifetime is to win a lottery or sweepstakes, according to a recent poll by the Consumer Federation of America. Other studies show that 16 percent of Americans are counting on the lottery to pay of their retirement. Yet one out of 383 workers become millionaires every year, reports Texas Banking.  How do they do it ?  Most of them become wealthy in two main ways:  they spend less than they earn, and they invest their money so it will work for them.

Assume you’ll live to age 80 or 85.  You may well live longer.  For example, men who live to age 65 will have an average life expectancy of another 15 years, according to the U.S. Census Bureau.  But half of those men reaching age 65 will actually live longer than age 80.  Furthermore, for every year you live beyond age 65, your average life expectancy is actually increasing.  All of which means you need to plan for a long retirement- or a longer working life.

Assume you’ll retire at your normal retirement age.  Odds are, you won’t retire when you planned.  A recent survey by the Employee Benefits Research Institute, the American Savings Education Council and Mathew Greenwald & Associates found that 43 percent of early retirees said they had retired “earlier than planned,” often because of “negative” events such as health problems, disability or layoffs.  Other workers are finding they want or need to work beyond normal retirement age, often in a part-time or less stressful job.

Assume you don’t need disability insurance.  People often focus on life insurance.  Yet according to the National Association of Insurance and Financial Advisors, Americans between the ages of 20 and 65 are more likely to become disabled than they are to die.  It’s difficult to qualify for federal or state disability assistance, and employer coverage is often limited, so consider privately purchased insurance.  It replaces 60 to 80 percent of income lost because you are unable to work due to a disability.

Assume you don’t need long term care insurance. The odds are, you won’t end up in a nursing home or require extensive home health care.  The odds are your home won’t burn to the ground either, but you wouldn’t consider going without homeowner’s insurance.  Why go without insurance that could protect you against the devastatingly high cost of long-term care?  Yes, Medicaid will pay for long-term care, but you’ll have to spend down or divest your assets to qualify, and the care probably won’t be as good as what you’d receive from private coverage.  Ask your general insurance agent whether he or she thinks you are a candidate for long term care insurance.

Disclosure: The opinions voiced in this material are for general information only and are not intended to provide specific advice or recommendations for any individual.

2021 award based on 10 objective criteria associated with providing quality services to clients such as credentials, experience, and assets under management among other factors.